On Friday, May 26, faculty, staff, students, along with friends and family of Roger Browse, gathered outside Goodwin Hall to remember him and dedicate a bench in his honour. The bench will sit along Union St for years to come as a place to remember him. Speakers included Robin Dawes (friend and colleague), Max Garcia (4th year Cognitive Science undergraduate), and Brian Butler (co-founder of the Cognitive Science program), who shared a touching eulogy reproduced below. After the ceremony, children Jenn and Robert shared a song written and recorded by Roger as a touching tribute to their father. 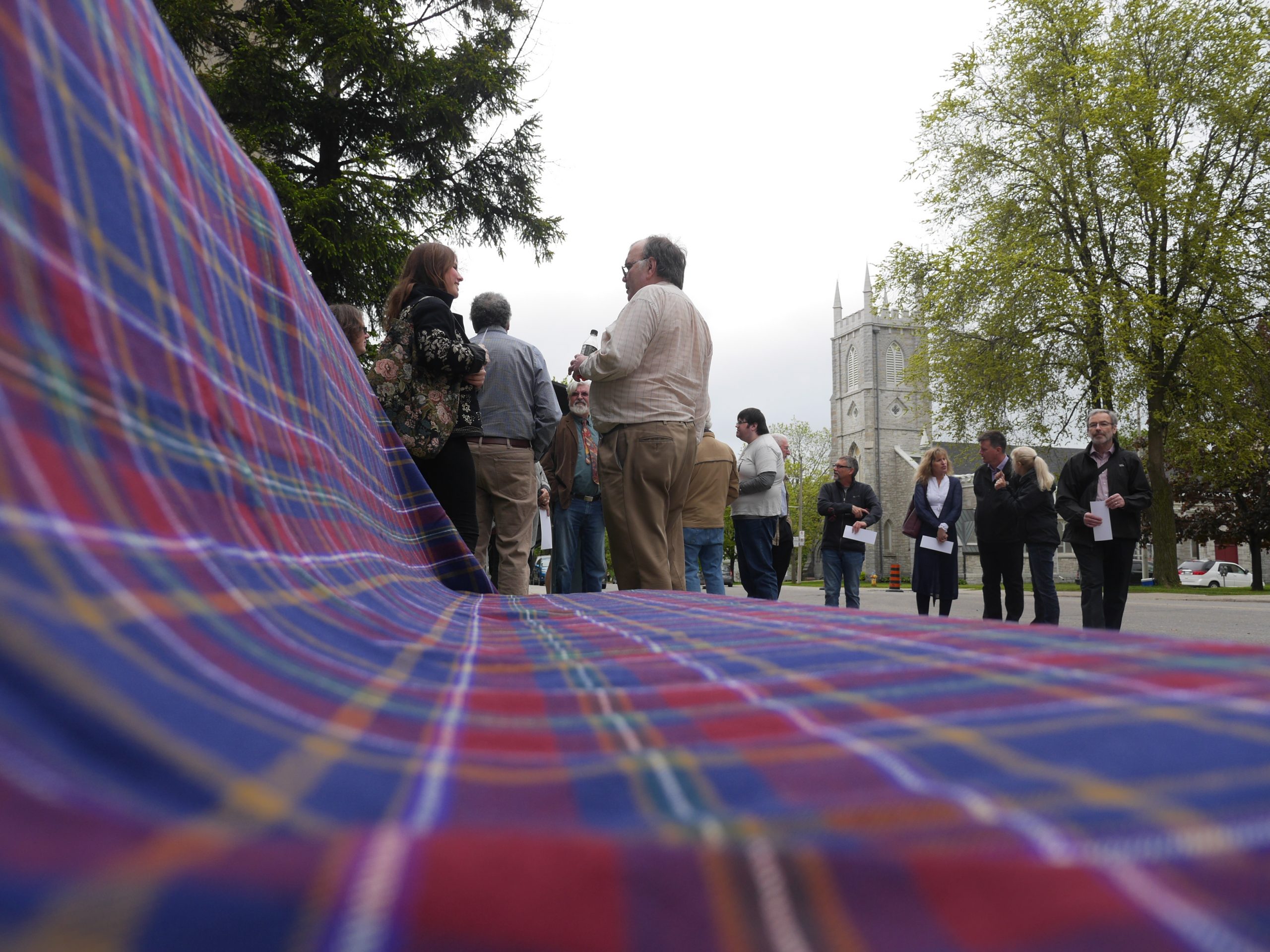 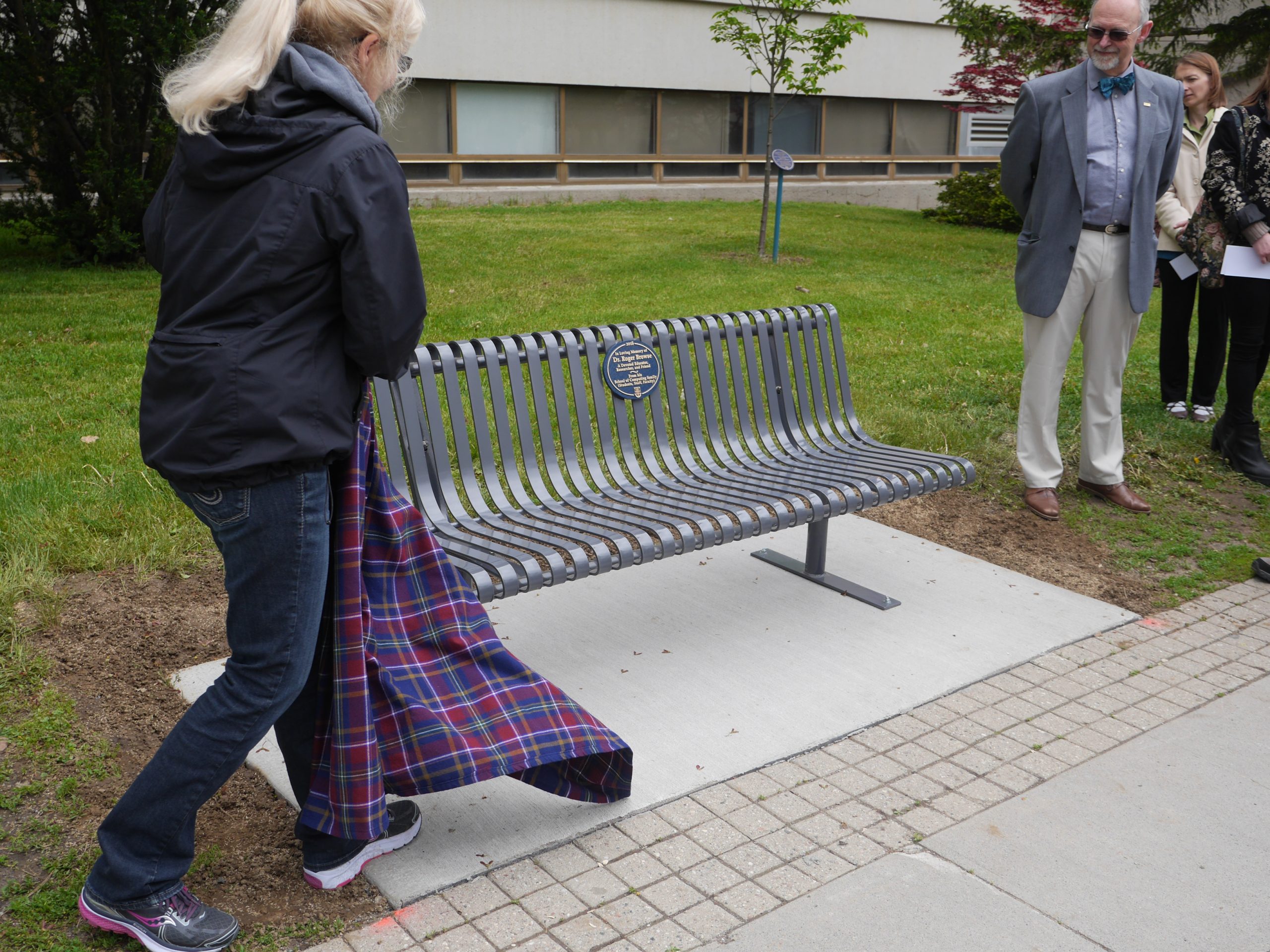 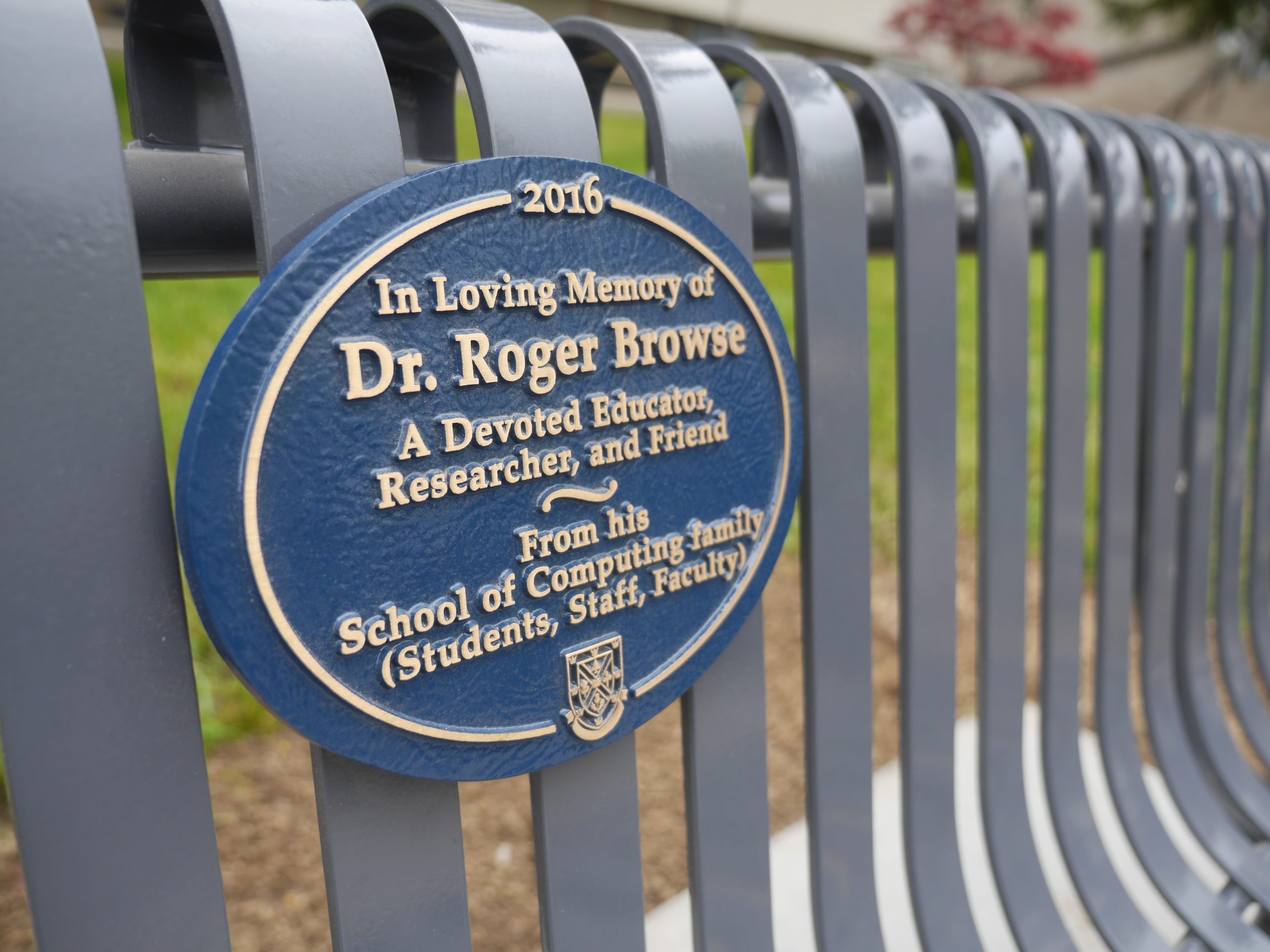 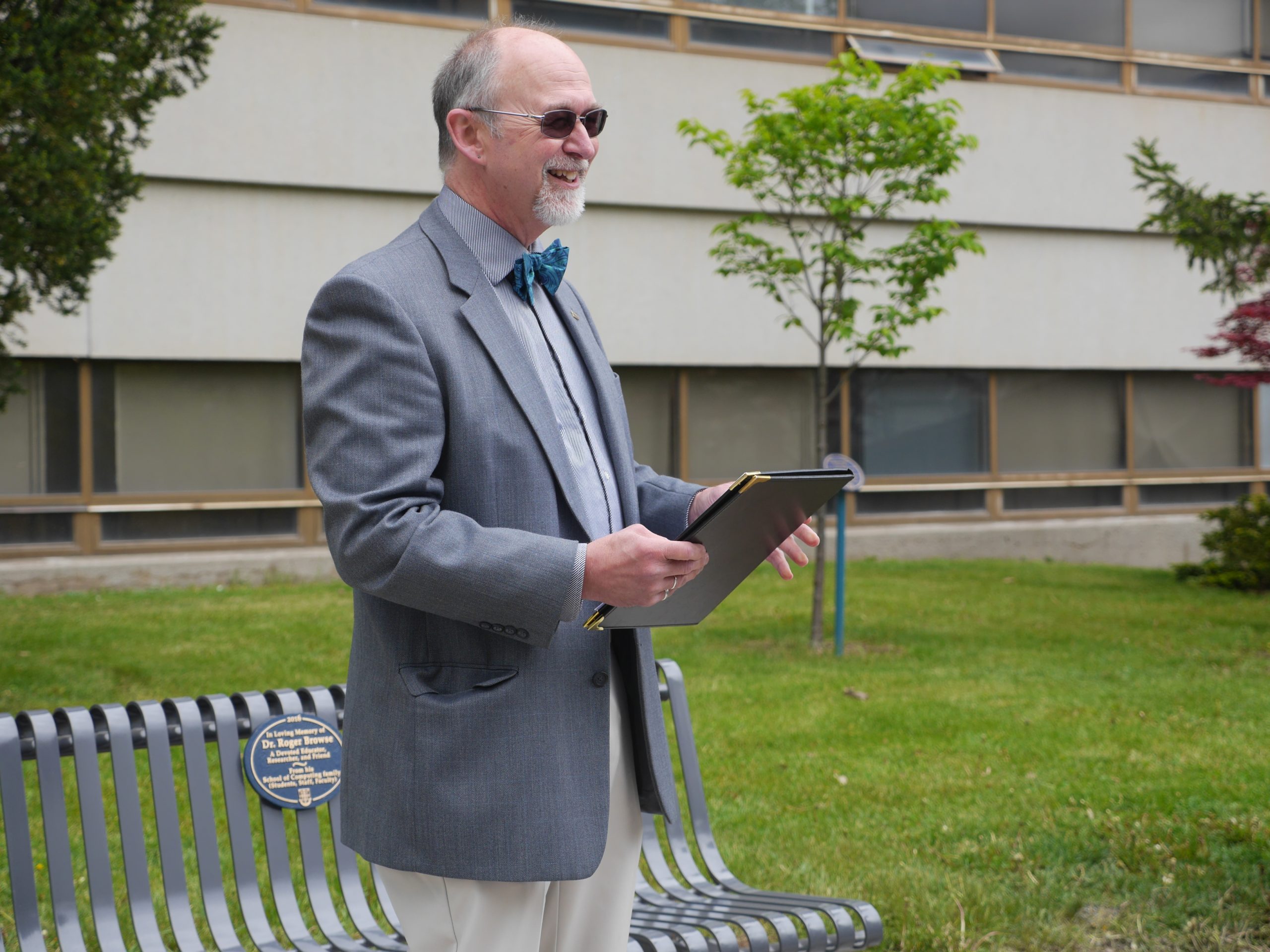 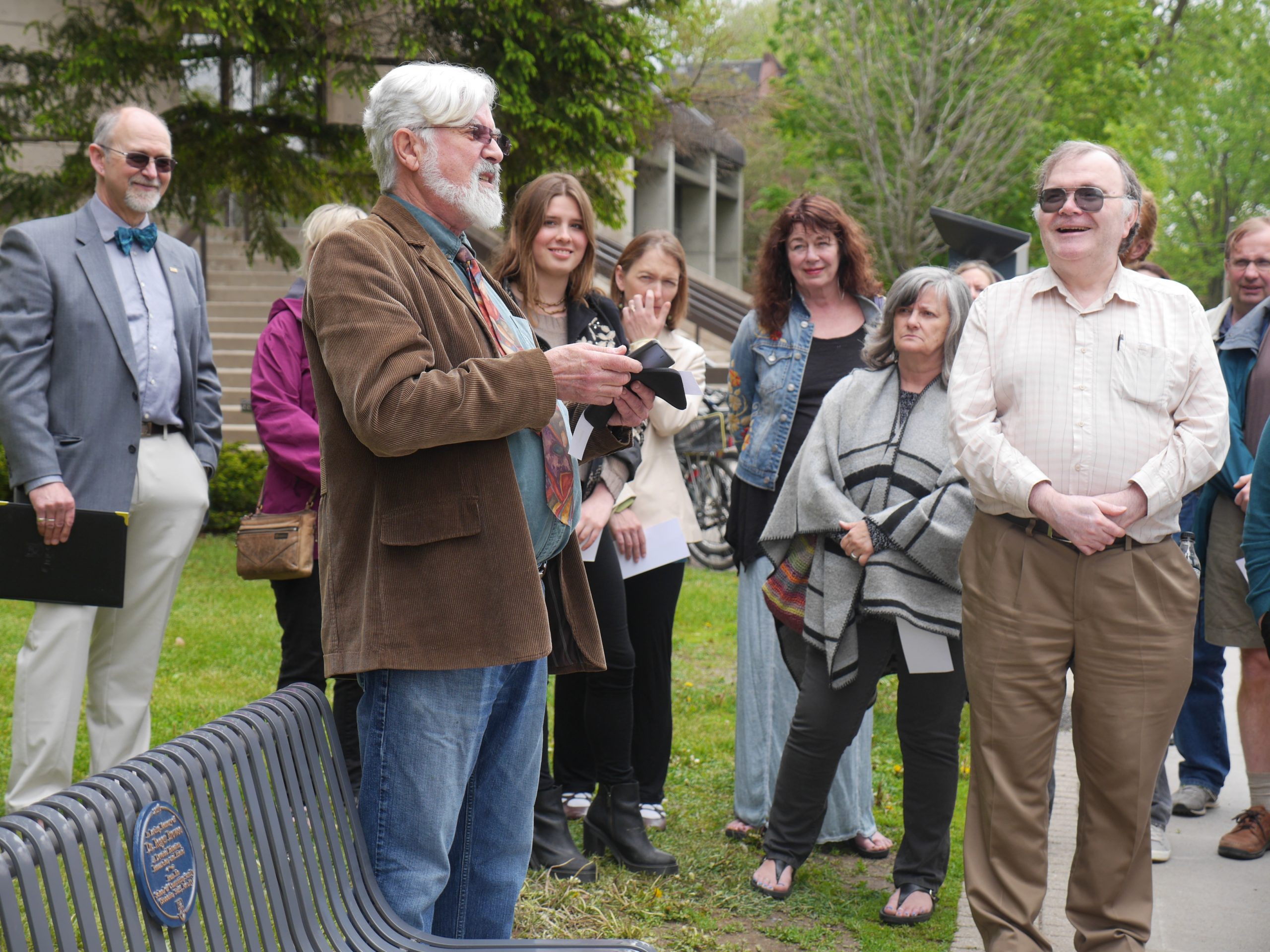 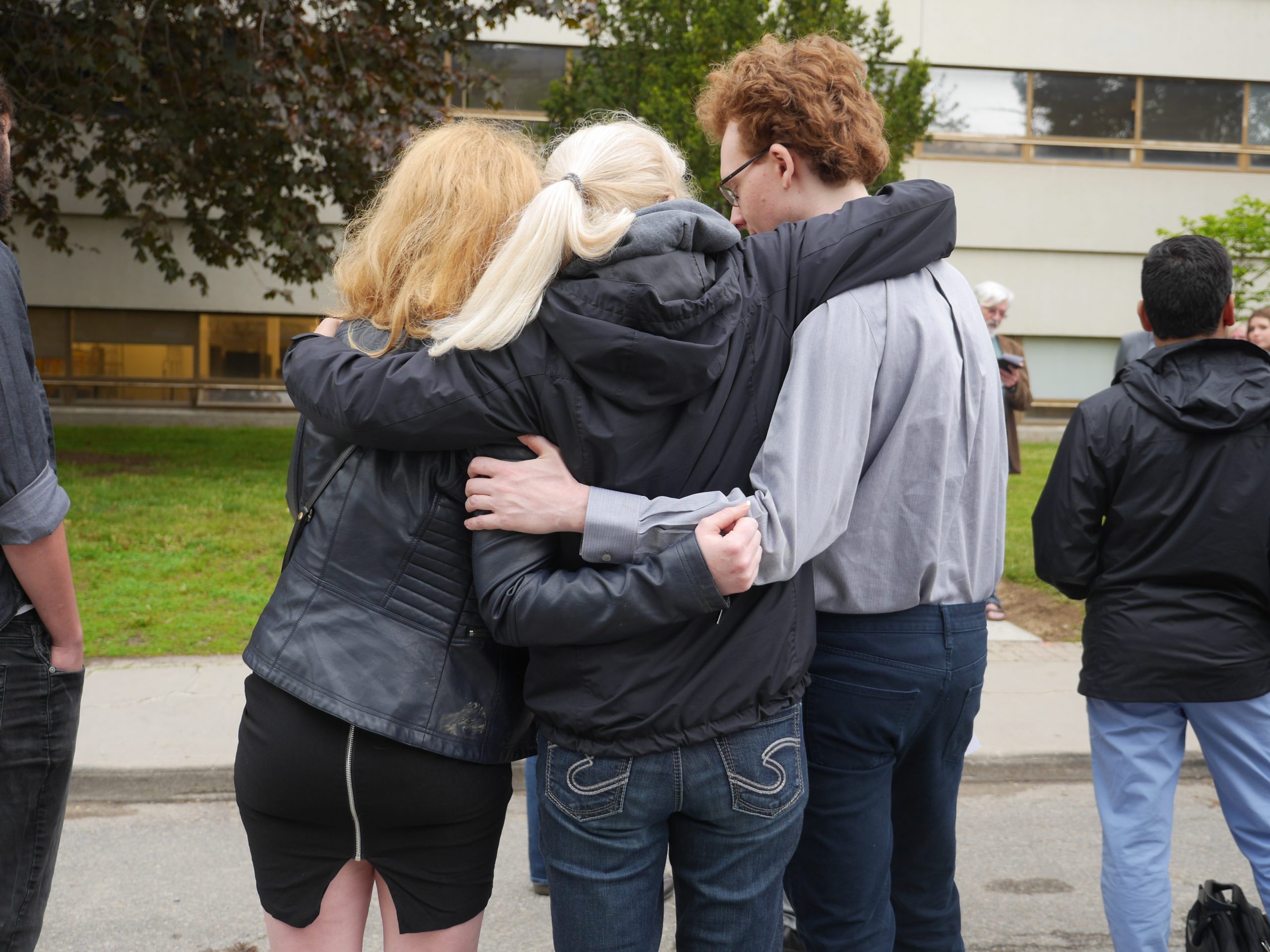 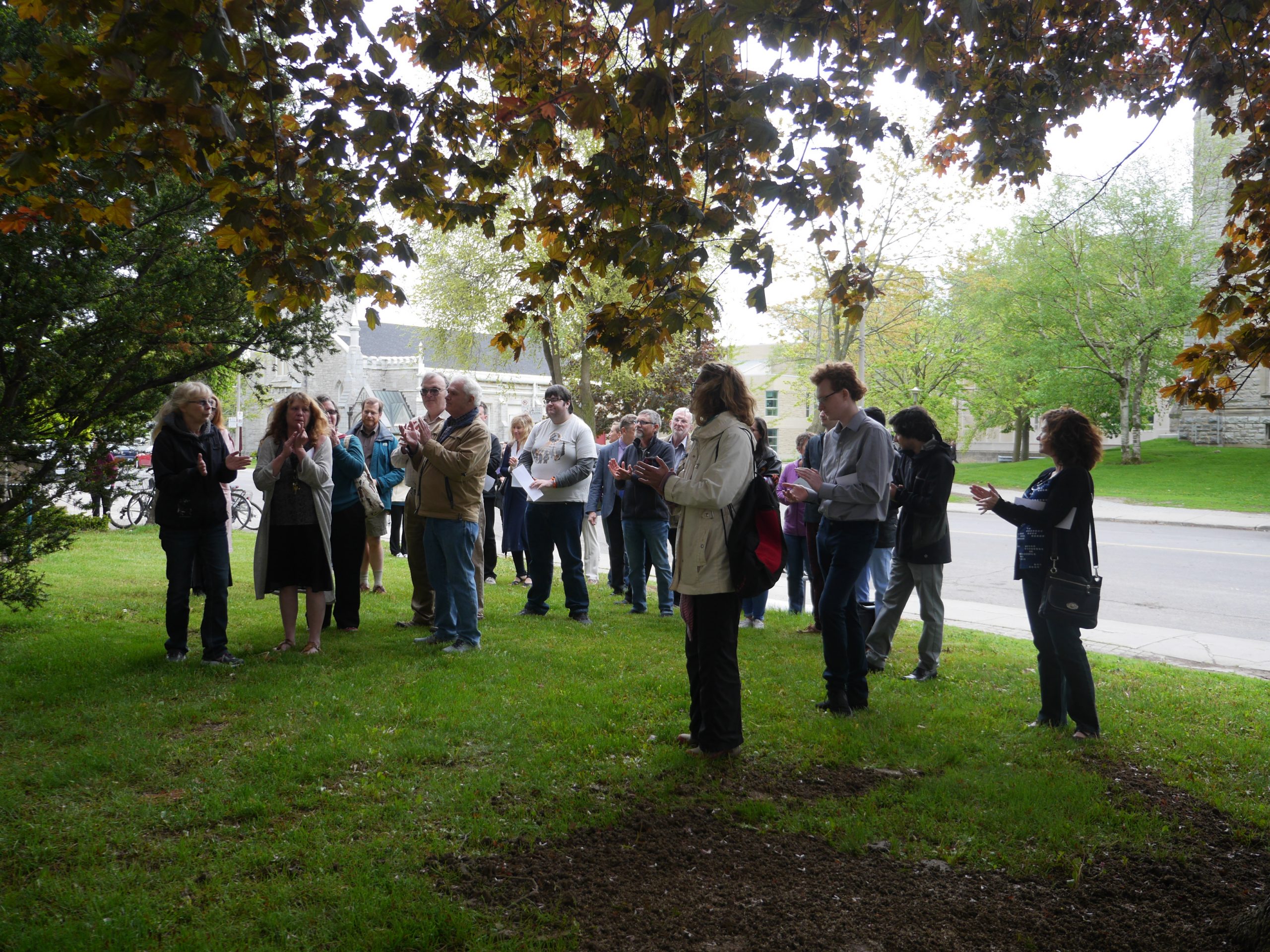 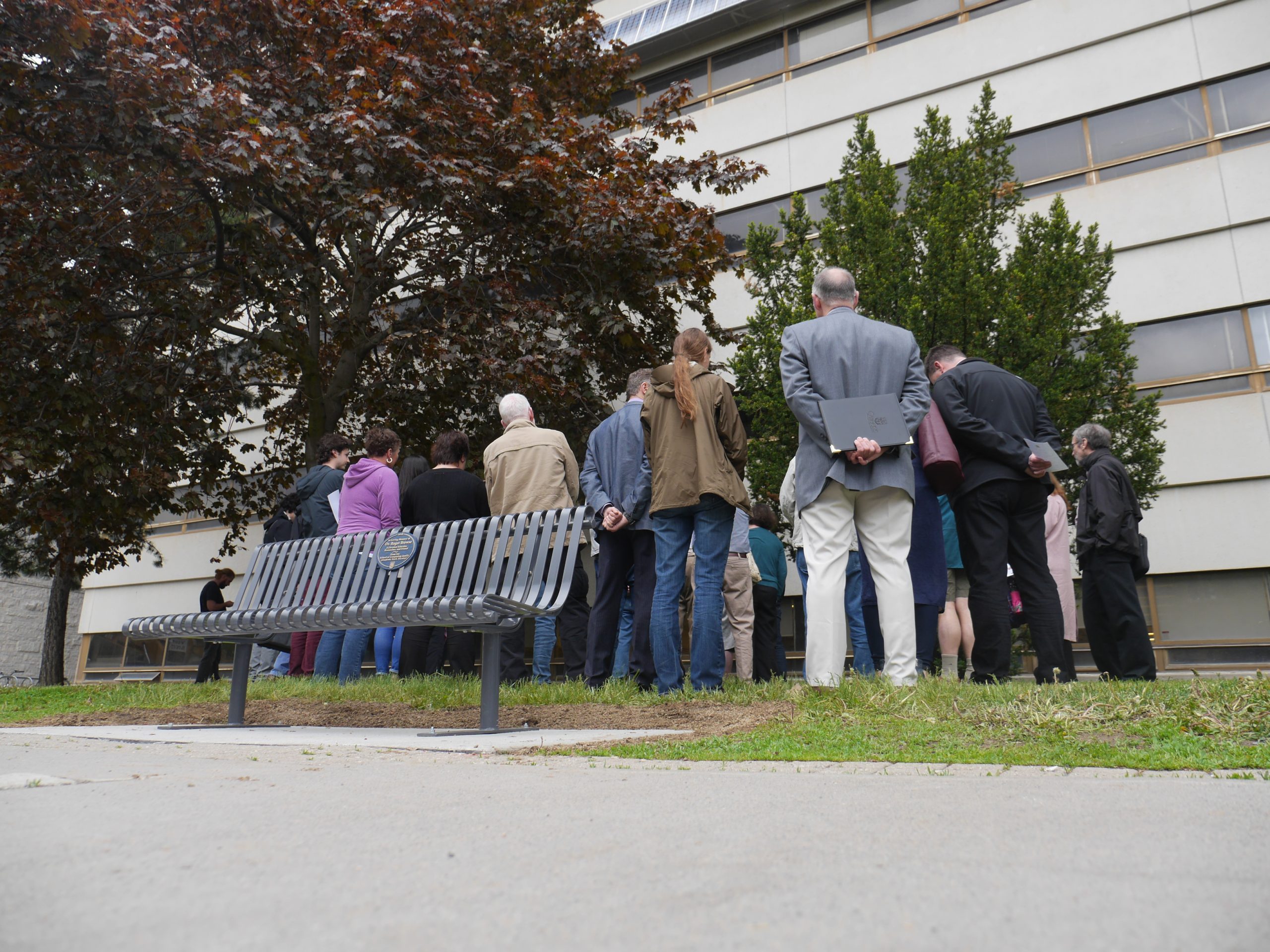 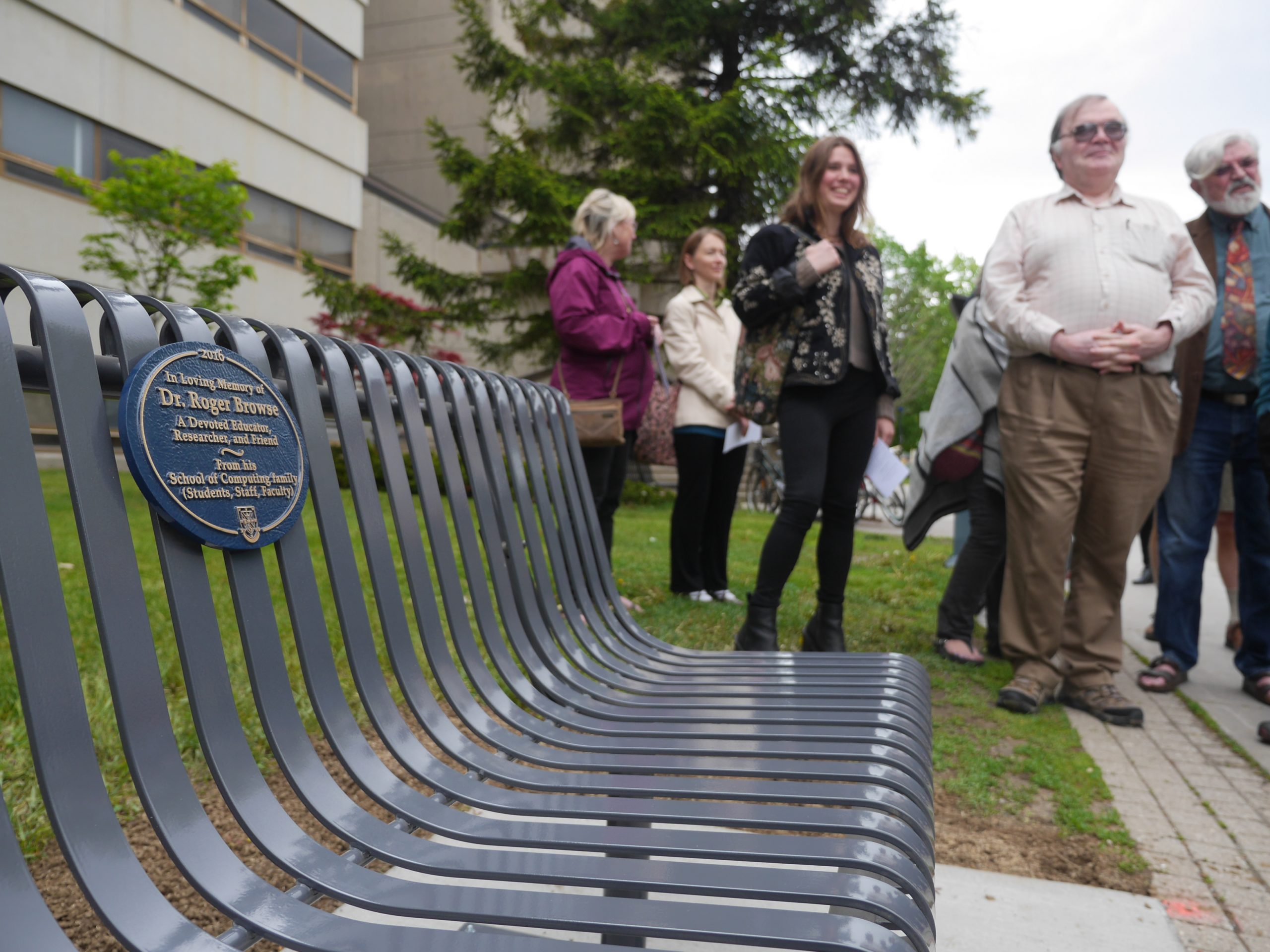 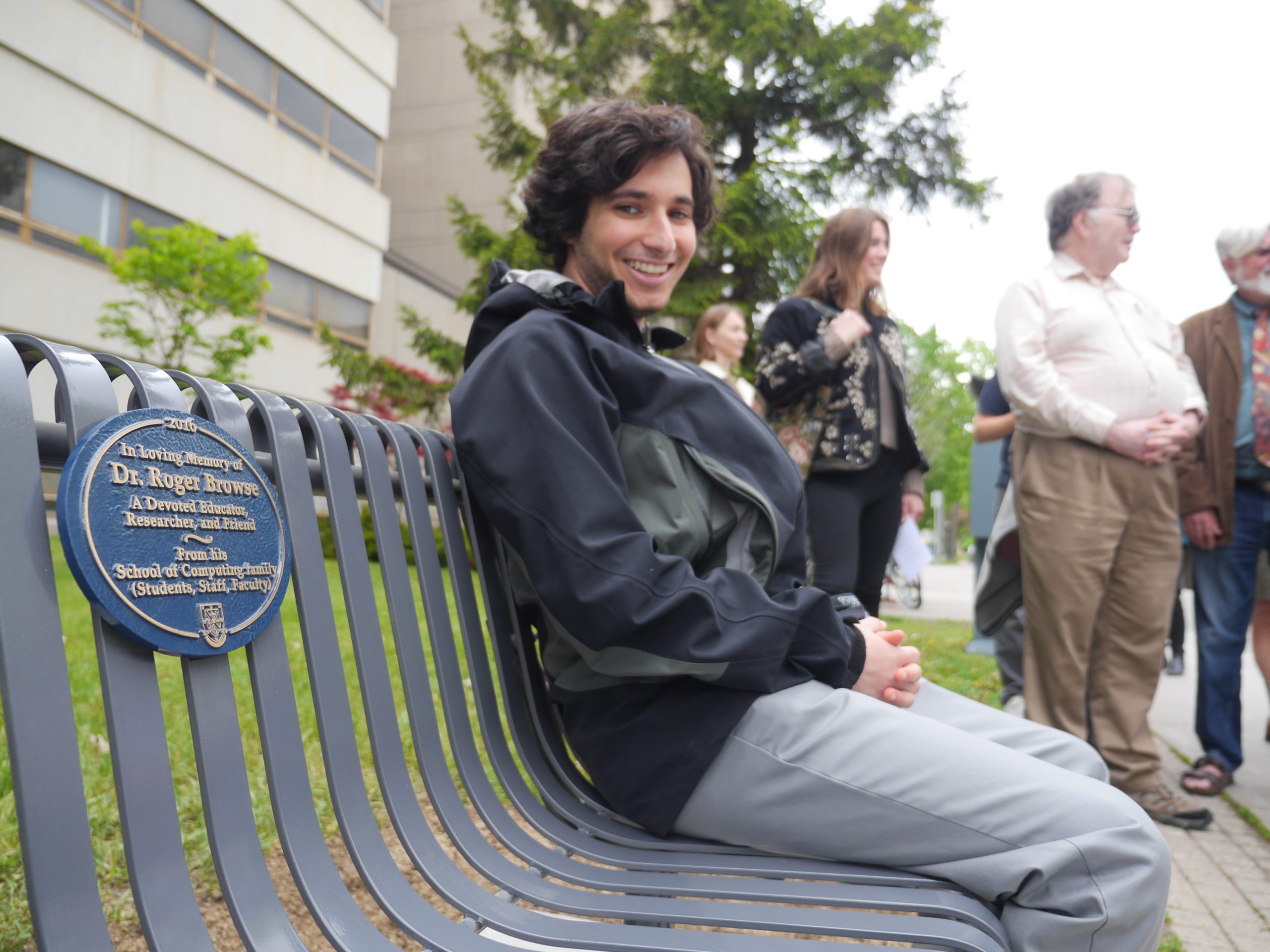 A Eulogy for Roger

Roger would have hated a eulogy.  In fact, I suspect he would have liked to sneak away so that people simply said, “Oh yeah, Roger-what’s-his-name.  Whatever happened to him anyway?”  However, Roger doesn’t get to vote so this is the eulogy I would have given if I had been asked which I wasn’t but that’s OK.

I knew Roger but I did not know him well until what we called the “Eddy Campbell incident.”  Eddy was assistant Dean and he discovered that the Ontario government under Mike Harris had instituted something called the ATOP program.  This was special financial assistance to university departments through their “Access To Opportunity Program” and rewarded departments for increasing their enrolments in technical programs like Computing.  Queen’s had received lots of money with promises to increase their enrolment – but hadn’t increased their enrolment.  Eddy said, “Get the enrolment up or you will be nothing but a great smoking hole in the ground!”

The program had been there before.  Roger and Doug Mewhort devised it in 1983 and dragged me kicking and screaming to a meeting where it was approved.  And it was very successful.  Most of our students went on to PhDs or extravagantly paid CEO positions in industry but it was small and we had to build it up.

How to build it up?  We invented COGS 100.  We listed a whole bunch of things that we thought were fun and put them into a course.  And we found a textbook by a guy who was as crazy was we were: a philosophy professor who had a laboratory.  It worked.  We used what we called tag-team teaching.  We’d both show up but one would give the lecture; the other would periodically interrupt with counterarguments.  Students loved it and some to this day think we really were at odds with each other.  One student comment said: “They bicker like an old married couple!”  Another said, “My profs are George Lucas and Michael Caine!”  Did Roger really look like Michael Caine?  Well, he had this soft-spoken way of saying “Brian, you’re an asshole.”

Two years after we started COGS 100 – and the course was now up to 100 – we had our usual coffee and a muffin afterwards.  I asked without thinking, “so where did you do your undergraduate?”

Roger said, “Well, I did one year at UNB.  And it’s funny.  There was a guy who compulsively cleaned off the table when he met his friends at the student centre.  His friends would dump ashtrays and other crap on the table just before he got there.”

It turned out we had both spent the same year at U.N.B.  I was part of a folk group called the “Newcomers” and our main rivals were another group that included Roger.  In fact, we were both at a party hosted by Bunny Coull and her brother Steve.  We had actually met 40 years before at U.N.B.  — and let me add for further irony — Eddy Campbell is now the principal at U.N.B.  Small world, isn’t it?   Well, it is with academia in Canada.

Roger wasted a year at U.N.B., although it may have been quite effective from a social point of view.  He moved to McGill, got serious and got a degree.  Then worked as a programmer and had a very promising career.  He applied to U.B.C. and got a very good supervisor, Alan Mackworth.  Mackworth’s father, Norman, was famous as a British psychologist who pioneered attention and eye movement studies.  Roger worked with Alan and moonlighted as a programmer for Anne Treisman and Daniel Khaneman’s lab.  Khaneman received the Nobel Prize in 2002. Thus, our LISP expert was slowly lead toward Cognitive Science.

Roger did not mention a lot about his time at U.B.C.  He did mention looking out his apartment window one day and seeing people crawling slowly across the lawn.  Asked, “Why?”, they responded, “Magic mushrooms, man!”  Then there was the Volkswagen.  Like all good students, Roger owned one but it was dying.  He was driving it to the junkyard when a woman rearended him and knocked off his bumper.  He just picked up the bumper, threw it in the back, and said, “Not a problem.”  I’m sure it made her day.

Roger arrived at Queen’s in the early eighties and, oh my, we did need him.  Computing and Information Science (CISC) needed him as an expert LISP programmer and he was.  He could take a 1000 line Fortran program and reduce it to 20 lines of LISP code – maybe 16 if he worked overnight.  He immediately got a cross-appointment to Psychology because he was one of these new-fangled Cognitive Scientists.

In 1985, our mutual friend, Doug Mewhort, was invited to Germany for a year as an international scholar.  They planned a conference on attention and Roger and I were the only Canadians that Doug could think of.  So we packed up and went to Bielefeld, West Germany, by quite different routes.  Roger landed in Amsterdam and rented a car, the only one available at the conference site.  I was desparate for cigarettes so Roger drove me into Bielefeld.  It was a large highway and at one point he said, “Look out.  I’m going to do a Ducarie three lane crossover.”  I was not born in Pointe Claire but I knew what he meant; a brief moment of highway hijinx and we got in the right lane.

In the late eighties, and most of the nineties, Roger settled into a period where his family mattered more than anything else.  He became – I’m sure he’d hate the word – a homebody.  He had children and they were the center of his life.  He told stories of getting up when the children were babies but keeping one eye closed so it would stay dark-adapted while he took care of them.  And changing the lyrics to “Alice’s Restaurant” to “Jennifer’s Restaurant” while he played guitar and sang to her.  Robb and Jennifer were the center of his universe…

Roger never mentioned the reason for the split in his marriage nor once uttered a word against his ex-wife.  He did complain about lawyers but, like, who doesn’t, eh.  I have no idea of who was right or who was wrong and I always felt that Roger wasn’t sure either.  I do know that the separation from his children was painful.  He moved to Manotick then moved back and all of us, his friends, worried about him.

The big compensation in his life was the expansion of the Cognitive Science program. It started small with 20 – 30 students in COGS 100.  But, damn, what good students they were.  We couldn’t mention anything but one or two of them hadn’t already been on the web checking it out.  Lectures became discussions; discussions became arguments – and students figured “Hey, here are two guys who are enthusiastic about this shit; maybe it’s hot.”

We played it by ear but, damn, it worked.  We showed students what we thought was interesting and they thought it was too.  Our 20 -30 students expanded to 240.  We were one of the stars of 100 level courses.  Why?  A lot of it was our enthusiasm; we liked what we studied and it was contagious.  Another part, we refused to follow a textbook; we did what we thought was important and fun.

We were never ever unfaithful to our discipline but we showed how it could be fun. We argued in front of students to show them there were two points of view.  I remember two Pre-Med students coming up to us and asking, “OK but what is the right answer?”  And we both nodded and said “I don’t know.”  Somewhere in Ontario there are two doctors going, “I still don’t understand!” but there are twenty COGS grads going, “Yeah, I don’t either!”

It is easy to underestimate what Rog and I did.  We taught five COGS courses; COGS 100 and 300, we did as tag-team teaching; COGS 200 was my domain while COGS 400 was his, and we shared COGS 499.  Our dynamic convinced some of the most brilliant computing students to look seriously at cognitive science.  We had fun but, meanwhile, we conveyed that fun to computing and linguistics and, on occasion, a psychology student.  Students to this day rave about the dynamic we created.

In 2014, we both shared a teaching award in the School of Computing for teaching.  Roger had earned it well.  He sent several students to UBC, his alma mater, and they have thanked him for that.  He is credited for inspiring so many students that it make me jealous. But they are right.  Maybe a student had screwed up a few courses – Roger could see that (he had done that!) – so he set them on the straight course. He was good at that.

It was a privilege to work with Roger.  He was not easy; when we disagreed the arguments were hot and heavy – and so much fun!  And there were two occasions when I convinced him I might be right – notice: might – and that was a triumph.  I never did convince him I was right about the Mr. Smith problem but that is for a second lifetime.

He is revered by his students.  I only hope I get a “nice prof

When he got ALS we had a deal: muffins. He liked Tim Horton’s “fruit explosion” and I would order five for him and a Carrot-Wholewheat for me.  I loved dropping over for muffins and we would chat about the damnest things.  Like Bunny Coull’s party and why he got pissed off at the Dean.  He was always true to his values and to his children.  I always asked, “How are the kids?” and it was his time to brag about Robb and Jenn.  Sorry guys, but I have to tell you, you were his world and he loved you so much.  His last words to me were bragging about you both.

I loved your Dad very much but I am not alone.  All his colleagues on the School of Computing website have added their sentiments.  He inspired students and challenged colleagues.  He did his job well and we all love him for it.  I only thank everyone for the ability to express this.  Roger was special.